Located in the civil parish of Stondon in the English county of Bedfordshire, Henlow Stadium was one of many tracks that opened during the boom period of greyhound racing during the 1920s. A site at Henlow Camp had offered straight track racing from 1923, but in 1927 a purpose-built stadium was created to house greyhound racing. The first race took place on the first of August, with the venue being independent for almost 50 years. With a capacity of just over 1,000, it remained a popular flapping track for a long time.

The site included a 412 metre track as well as restaurants, bars and kennels. In 2020, however, it looked as if time was being called on the stadium. In the end, it got a stay of execution, though at the time of writing is only open to spectators and there are no restaurants for people to visit. It is the longest established track in the United Kingdom, but fears were that it was going to be knocked down in order to make way for housing. This was in spite of the fact that racing is broadcast from Henlow all around the world.

The track at the modern day Henlow Stadium is 412 metres in circumference, with the first bend coming after 60 metres. The racing that takes place on the track does so over 277 metres, 460 metres, 550 metres, 692 metres and 870 metres, with a Swaffham McGee hare used to get the dogs going. The stadium has enough room for 1,000 spectators as well as a car park that is able to fit 400 vehicles.

The current situation at Henlow is that it is only open for spectators. That means that the restaurants are closed, with bars only offering limited services when compared to how the track was when it was fully operational. Indeed, in 2006, a new restaurant was built at a cost of £464,000, so the hope was always that it would be able to offer quality facilities in the long-term. As things stand, here is when you’ll be able to enter the stadium in order to watching racing take place: 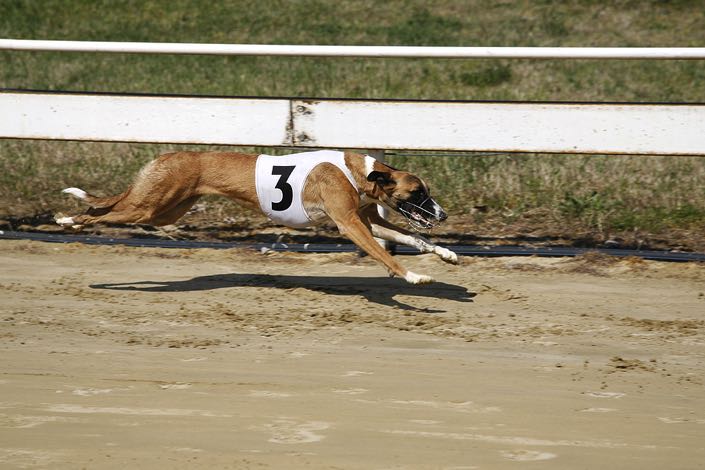 It is common for big racecourses to have notable races attached to them. Though numerous races have been run at Henlow over the years, such as the Puppy Cup and the Stondon St Leger, the reality is that the dubious nature of the track’s future meant that most of them were either discontinued or else moved elsewhere. As a result, if you’re hoping to see a relatively big race when you head to Henlow, this is your best bet:

Formerly known as the Bedfordshire Derby, the Henlow Derby was first run in 1984. As you have probably guessed, it is based at Henlow Stadium, taking place every year. When it was first run it took place over 484 metres, but in 1994 that was switched to 460 metres and it has remained at that length ever since. Arguably the most notable dog to have won the race was Taylors Sky, who was trained by Charlie Lister and won the English Greyhound Derby in 2011. That was the same year that he won the Henlow Derby, alongside 11 other races to win the Greyhound of the Year title.

The biggest news story in recent times that concerned Henlow Stadium was the one about the fact that the stadium was likely to be demolished to make way for housing. Local planners had agreed to the development of the site in 2020, only for Kevin Boothby to seek a five-year extension to his contract that should have ended in November of 2021. Having already gained a 10-year lease of the previously defunct Towcester Greyhound Stadium, Boothby also took over at Oxford in the hope that he’d be able to revive racing there too.

A straight track that opened in 1923, Henlow Stadium opened as a proper greyhound track four years later. During its formative years, the track saw the hare propelled around by a drag lure that was driven by a lorry wheel. The spectators were found on the Ickleford side of the track and it became so popular that on Sundays the crowd would accidentally block the main road. It remained a popular place for people to go to watch unlicensed racing even after the Second World War, resulting in a switching of location for the crowd to the other side of the track.

In 1974, a dog called Come on Wonder broke the track records at both Crayford & Bexleyheath Stadium and West Ham Stadium, but was disqualified and ended up running on independent tracks. It won the Henlow Derby, giving the track a degree of prestige that it had lacked before. Two years later and the track was finally able to have races run under the National Greyhound Racing Club rules, meaning that it was no longer an independent venue. It also resulted in changes being made to the length of the track, dropping the circumference to 412 metres.

One of the biggest wins for the stadium came in 1992 when Patsy Cusack took Pennys Best to the Greyhound Derby Final. Then, two years later, the track was bought by Jock McNaughton, a man who had previously been a permit holding trainer at Rye House Stadium. The venue remained much the same for most of the following decade, before a nearly half million investment resulted in the building of a new restaurant for the stadium. It then won the English Greyhound Derby the following year, thanks to Westmead Lord.

In 2008, Bob Morton and Kevin Boothby bought the track, saving it from potential development. In 2012, Morton left to return to the channel Islands, with Boothby taking sole charge. Three years later and Rio Quattro won the English Greyhound Derby and the £250,000 prize money. In 2018, a deal was signed with Satellite Information Services to broadcast racing from the venue four times a week and Mark Wallis came on board as a trainer.