Also known as Meadow Court Stadium and previously called Stainforth Stadium, Doncaster Greyhound Stadium is, as you might well have guessed, located in Stainforth, close to Doncaster. It isn’t to be confused with Doncaster Greyhound Track, which was the dog track that could be found close to York Road. It first opened its doors in 1929 as a speedway track, seeing greyhound racing take place for the first time 12 years later. Back then it was an unlicensed track, which it remained for 35 years, later joining the National Greyhound Racing Club and gained its licence.

Race meetings at the track are held on Monday and Wednesday evenings, as well as Saturday afternoons and Sunday mornings. On Saturdays, you’ll be able to see 14 races taking place and there are 12 races at all other meetings. That allows plenty of opportunity to get down and see some dog racing, whilst fantastic facilities ensure that you’ll feel comfortable and well-looked after. The track also boasts a big competition in the shape of the Yorkshire St. Leger, which took place for the first time in 2005 and is run over 661 metres on a sand track. 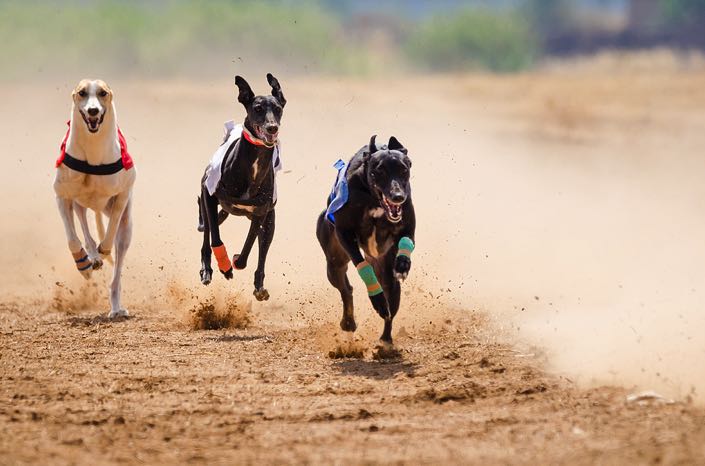 Meadow Court Greyhound Stadium has a track with a circumference that is 438 metres. The run to the first being is either 68 metres or 105 metres, depending on the length of the race that is being run. There is a Fannon / Swaffham hare, which encourages the dogs to notch up some decent speeds. Here is a look at the lengths of races that take place at the stadium:

The capacity of the stadium is 1,500, whilst parking is available for as many as 500 vehicles, including space for coaches and minibuses. There are a range of food and drink options on site, including a restaurant that offers tremendous views of the track. If you’d rather position yourself somewhere less formal, considering the fact that you can’t wear baseball hats whilst inside the restaurant, then you can look to any of the floors in the grandstand, which is three-stories high. The venue is also wheelchair accessible.

There is no question that the biggest race in terms of prestige that takes place at the stadium is the Yorkshire St. Leger. Run over 661 metres, the race promises £12,000 to the winner at the time of writing. It was first run in 2005, with Farloe Divide being the inaugural winner for famed trainer, Charlie Lister. Indeed, Lister has won the race more than any other trainer, managing it with dogs such as Keplar Nine, Lonely Boy and Carbams Tom in 2017, 2011 and 2010 respectively. At the time of writing, he’s won the race five times.

The sad fact is that not all news stories around greyhound stadiums are positive. The good news is that the negative news featuring Doncaster dog track is not about any harm that the dogs have suffered at any point, but rather because John Watson Senior was a Director at the stadium when he was arrested as part of the United Kingdom’s largest illegal tobacco factory. Though he was only on £15,000 at the time, he had spent £180,000 taking 18 people on holiday and on expensive cars. He was jailed for five years and three months in 2020 for his role in the operation.

Following work on marsh land near to Station Road in Stainforth, a speedway track was opened named after the area in 1929. It consisted of three inches of concrete before having sand on top and being finished with nine inches of cinder. Easter Monday 1930 saw the first speedway session take place there, with Stainforth Amateur Athletic Club buying it in 1933. The outbreak of the Second World War brought an end to athletics, but greyhounds racing took place at the venue for the first time in 1941, with plans drawn up for it to happen every Saturday at 5.30pm.

In the wake of the war, the track maintained its flapper status for the next 35 years, seeing both trotting and boxing events take place at the venue, which was owned by Benjamin Lovatt at the time. Meetings began to take place at Tuesdays and Fridays as well as the Saturdays that were already in the calendar. Though it was sold in 1976, plans to upgrade it never came to fruition and instead the track was closed in 1978, remaining in a derelict condition for the next 13 years. It wasn’t until Chick Hicken bought it in 1992 that it began to get back on its feet.

Hicken submitted plans to build a new track to Doncaster council, which were approved and a new stadium was built at a cost of around £1.5 million. Barbara Tompkins was brought in to be General Manager as the new-look Stainforth Greyhound Stadium made moves to become part of the National Greyhound Racing Club and gain a licence. When Tompkins retired in 2004, a decision was taken to begin re-branding the track as Doncaster Stadium, which was completed two years later, with Stephen Gray joining as General Manager after carrying out that role at Belle Vue. A deal was signed with Sports Information Services to ensure racing would take place every Monday, Wednesday, Saturday and Sunday.

At the time of writing, the following track records are in place: