Located in Suffolk between Cambridgeshire and Norwich, Mildenhall Stadium not only hosts greyhound racing but also speedway and stock car racing. In other words, it is the place to head for all of your racing needs if you fancy watching a variety of different things. When racing is taking place, the venue is often referred to as Suffolk Downs, so if you’ve seen it called that at some point then that explains why. There is a fish and chip shop actually inside the stadium, meaning that it isn’t just the generic on offer if you’re hungry.

Interestingly, the track has only had greyhound racing since 1990, with the venue originally being built for speedway back in 1975. In 2006, a couple bought a house close to the stadium and then began to complain about the noise, in spite of the fact that racing had taken place on it since it was built. Ridiculously enough, they won a court case about the issue and the stadium was threatened with closure. Deane Wood of Spedeworth Motorsports has owned the venue since 2016, with greyhound racing stopping temporarily in 2018 before resuming in 2022.

Within easy reach of both Cambridge and Newmarket, Mildenhall is a popular venue for people who enjoy watching greyhound racing. There is enough room within the stadium for 8,000 spectators, with the parking area boasting space for 5,000 vehicles. It is fair to say, therefore, that Mildenhall isn’t a small venue compared to many of the other greyhound track around the country. The Race View Restaurant will, as you might suspect, allow you to see the racing taking place as you have a drink or a bite to eat. If you’d rather something less formal, you can go to the stadium’s own fish and chip shop.

The Fen Men is a licensed bar within the venue, with a second licensed bar located underneath the grandstand on the home straight. That means that there is plenty of space to be able to get a drink whilst you’re watching the races. Speedway races take place between April and October, whilst greyhound racing is held on Tuesday and Friday evenings for the public and there are trials on Wednesdays for owners and trainers. The course has a Swaffham hare. The track’s circumference is 325 metres, with races held over the following distances: 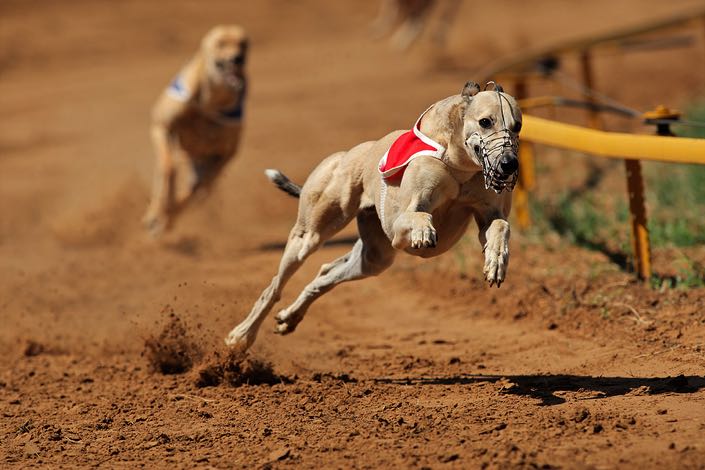 Most of the big courses around the country have noteworthy races that take place at them, but the dubious nature of Mildenhall’s long-term future means that there aren’t currently any big races that are run at it. That might change in the future, of course, so if it does then we’ll look to update this section accordingly.

One of Mildenhall’s most recent appearance in the news was actually for sad reasons and nothing to do with the greyhound racing. Danny Ayres was a speedway stay for the Mildenhall Fen Tigers and passed away at his home in February of 2020. In June the following year, the grandstand at the stadium was renamed in his honour. The Danny Ayres Stand will commemorate a rider who was loved by speedway fans across the country thanks to his all-action style, with the world of speedway shocked and saddened when news of his death became public.

The most recent news story around the stadium came in January of 2022, when it was confirmed that the Greyhound Board of Great Britain granted the venue its racing licence. It gave said licence under the name of Suffolk Downs Stadium, which is what Mildenhall is known as when greyhound racing takes place. It meant that the track had been successfully revived by Kevin Boothby, who had bought it a few years before with the belief that greyhound racing could indeed be brought back to the venue.

A speedway track was built on farmland close to the location of the stadium back in 1971 by the farmer who owned it. Two years later, it was decided that the track would be moved to the south side of the junction of Hayland Drove and Cooks Drove. It was a primitive track, with sheds as dressing rooms and hay bales as safety fences, but it proved popular enough to mean that the Mildenhall Fen Tigers was created as a speedway team in 1975, entering the National League to compete. The result was that the facilities would be improved.

In 1990, Dick Partridge approached the farmer, Terry Waters, about the possibility of introducing greyhound racing to the track. He agreed, so a lease was agreed and the greyhound track was built. The facilities were improved, with concrete terracing and lights brought in. There were 74 kennels built on the site, with a paddock and weighing room also constructed. A licence form the National Greyhound Racing Club was granted, so greyhound racing took place for the first time on the 21st of September in 1991.

The venue underwent a temporary closure in 1992 before re-opening under new management. Terry Waters took over from Dick Partridge in 1995 and then one of the sport’s best trainers, Linda Jones, began attending the track on a regular basis whilst opening Imperial Kennels nearby. There were numerous changes of management as well as alterations to the length of the races that took place, before a couple bought a house close to it in 2006 and complained about the noise. The case went to court and they won, resulting in the stadium being threatened with closure.

On January the 15th, 2018 it was announced that greyhound racing would cease despite having taken place on Tuesday and Friday nights for nearly three decades. The majority of the trainers at the track left, resulted in racing all but stopping before the venue was eventually closed. It re-opened in 2022, nearly two years after Kevin Boothby had bought it and began the job of getting it ready to see racing return. The first meeting of what was now Suffolk Downs Stadium took place on the eighth of February 2022.

Here are the records for the distances run at the course:

New distances were decided upon when the track re-opened, but at the time of writing, the only record we know of is the 23.70 seconds in which Mister Eventful completed the 388 metre race on the 25th of March 2022.